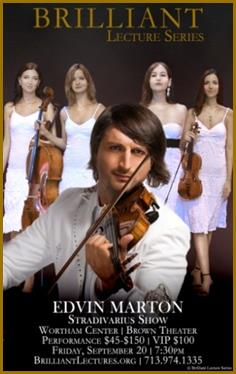 We announced the benefit performance and Houston premiere of the Hungarian Edvin Marton – Stradivarius Show at the Brown Theater of Houston’s Wortham Center.

Edvin Marton is a Hungarian born and raised charismatic musical genius who plays on a Stradivarius, hand-crafted in 1697 and valued at over $3 million. He understands how to engage people of different cultures and ages and had become a huge phenomenon, particularly in Europe and China.  After the Olympic Games in Turin, Edvin Marton became a superstar of modern pop music. 500 million watched as the famous violinist entered the rink along with Olympic champion Evgeni Plushenko, and played his rendition of TOSCA. From this time his name hasn’t left European and Chinese tabloids, and the world of modern classical music has been opened to millions. In the spring of that year, his talent was acknowledged by the jury of one of the most prestigious awards in the world, being honored with an Emmy for best composition of the year for TOSCA.  Please see www.brilliantlectures.org  for a video depicting this exciting show.

There are only 8 Stradivarius violins in the world such quality. Edvin Marton – Stradivarius Show includes Edvin Marton and the $3 million Stadivarius, backed by an orchestra of 5 beautiful girls who travel the world with Edvin. The show contains a unique combination of specialty programmed light together with remixed classics as Vivaldi Storm, Tosca Fantasy, Rio Carneval, Love in Venice, Ibiza, Godfather, Hungarian Rhapsody, Paganini 5 and much more.

May we discuss potential ways to notify Hungarians in Texas/USA of this extraordinary Hungarian related event in return for acknowledgement or advertisement in the commemorative brochure? I have attached a copy of the graphic and the link for the video on our website is https://www.youtube.com/watch?v=vCgv5RTOWtQ.